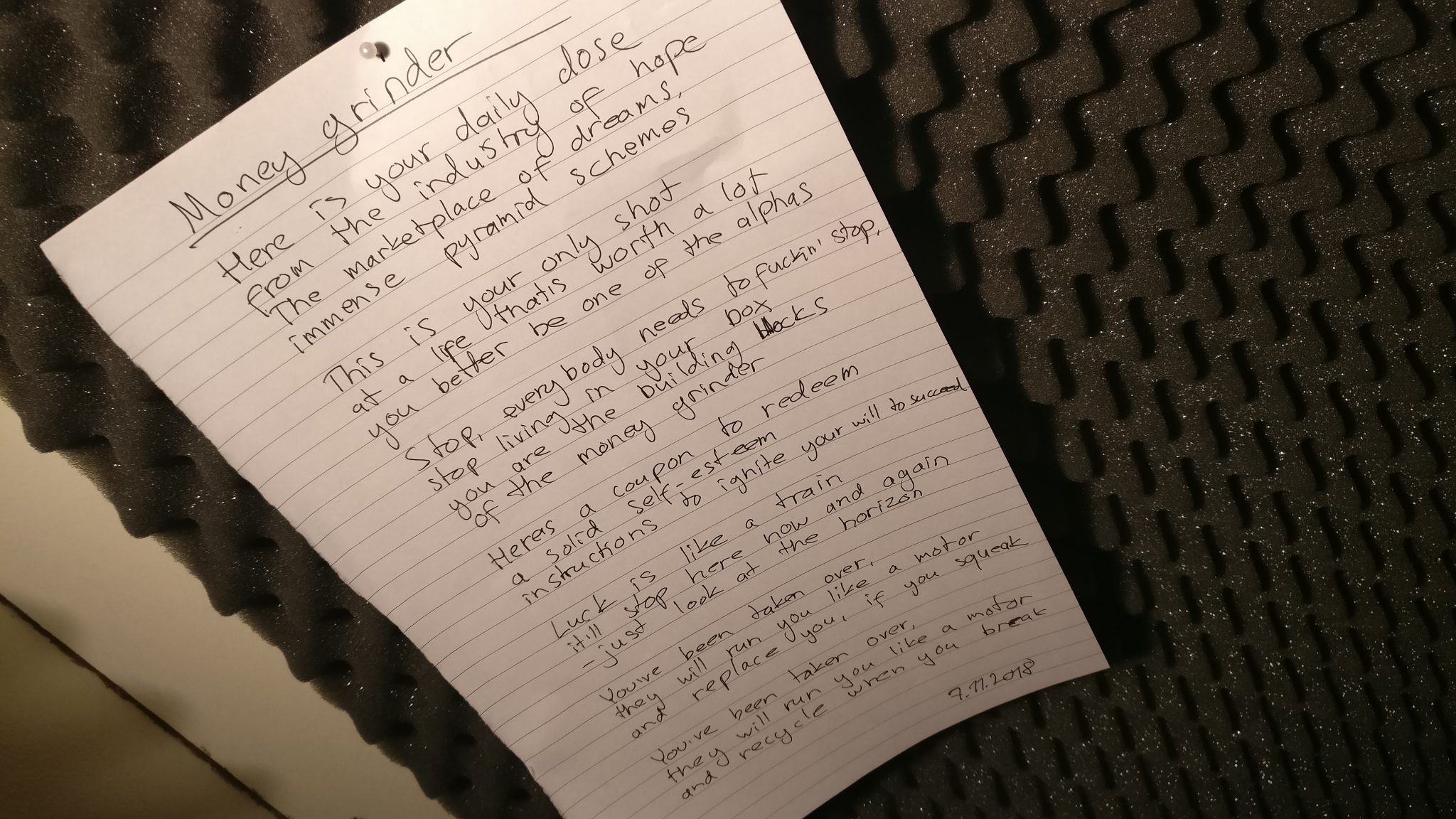 I do a fair bit of research to keep my titles unique. I always check Spotify and Google, if a song of the same title exists. I want my titles to be witty, because a worn-out title can give the impression of a worn-out composition. Of course it won’t make a huge difference, because songs are mainly heard and not read, but having unique titles will help new fans to identify your music more easily, as there aren’t hundreds of songs of the same title.

Pronunciation is often overlooked, when writing song lyrics. It’s dramatically important to write lyrics that sound good. Starting a line with a consonant or a vowel makes a huge difference. If you need explosive punch for a chorus – start with a consonant. A vowel will make for a very different tone, and an easier start for a melody. My choruses tend to start more often with consonants that are spat out with lots of force.

Usually demo lyrics are improvised, and naturally sound good. They haven’t been conformed to suit the rest of the lyrics, so they usually sound better. I would encourage to make the rest of the lyrics conform the the chorus lyrics, than the other way, because you really don’t want to threaten the power of the chorus in any way. The same goes for verses – I’d rather retain the sound of the words, than to find the perfect word.

My preferred order for choosing the right words is that they…

The formation of vowels and consonants with the tongue

Remember to keep testing the lyric with different vowels while writing, and you’ll know which one is more effective.

While not necessary, I do like to have some rhymes in my lyrics. Lyrics with rhymes are definitely harder to write, but when they “click”, it’s quite rewarding to sing them. But if the story is better told without rhymes, please do so. I think it’s better to write the words that you’d actually want to say, than to find a perfect rhyming pair, because that will likely dumb your lyric down and make it more generic. Genericness is something I really want to avoid in my own writing.

I’ve covered rhyming tools in a previous post about the lyric writing tools that I use.

Not too much repetition

Many hit songs repeat the same lines over and over again, but I’m not particularly fond of singing the same lines too many times. The same melodies and motifs are repeated many times, but not the lyrics. One way to keep lyrics repetitive enough, while having enough variation, is to start with the same line, but ending it differently each time (like in my song “Until the guilt is forgiven” or “Jesus on my trunk“).

Choruses shouldn’t have too many lines, because it’s impossible to sing along, if there’s too much going on. One line is enough, but two lines is better. The Prodigy is known for having very short lyrics, and repeating just a few lines. I enjoy that approach as well, if the music is interesting enough.

If a song has lots of lines, it’s hard to remember them all while performing. Having to concentrate too much on the lyric can really make the live performance less impactful, and distract you from the feeling of the song. This is probably why short (3-minute) songs are so popular these days – it’s more rewarding for the listener if every line can be memorized.

Tell a story with very specific events and things

A song lyric can have many levels of detail. Usually the more detailed a lyric is, the easier it is to understand what it is about. A good lyric shows images from a looking glass view and from a bird’s eye view. Usually the chorus can be more vague, if it ties the verses together, or the other way around.

I like to draw some of my lyrics before I write them. A photo or a video clip can also serve as the scene of the lyric. I pick details that describe the events as accurately as possible. Interaction with objects can convey a feeling just as well as describing human reactions.

Not all lyrics need to be stories, though. Sometimes it’s enough to just write random notions, a collection of memories or lines that just sound good.

Stay in one tense

It’s easier to understand a story, if the lyric is not constantly moving in time. You can jump in time, if the music supports the changes. A chorus can be in present time, and verses can be in past tense, or the story could move from a past tense to the present. It rarely makes sense to have many tenses in one verse, but of course that could work, if you’re trying to convey the state of a confused mind.

These are some of the tricks I’ve learned so far, but feel free to disagree. You’ll probably come up with something original, and that’s always better than trying to check all the boxes. Have fun, and let me know if you have any questions!