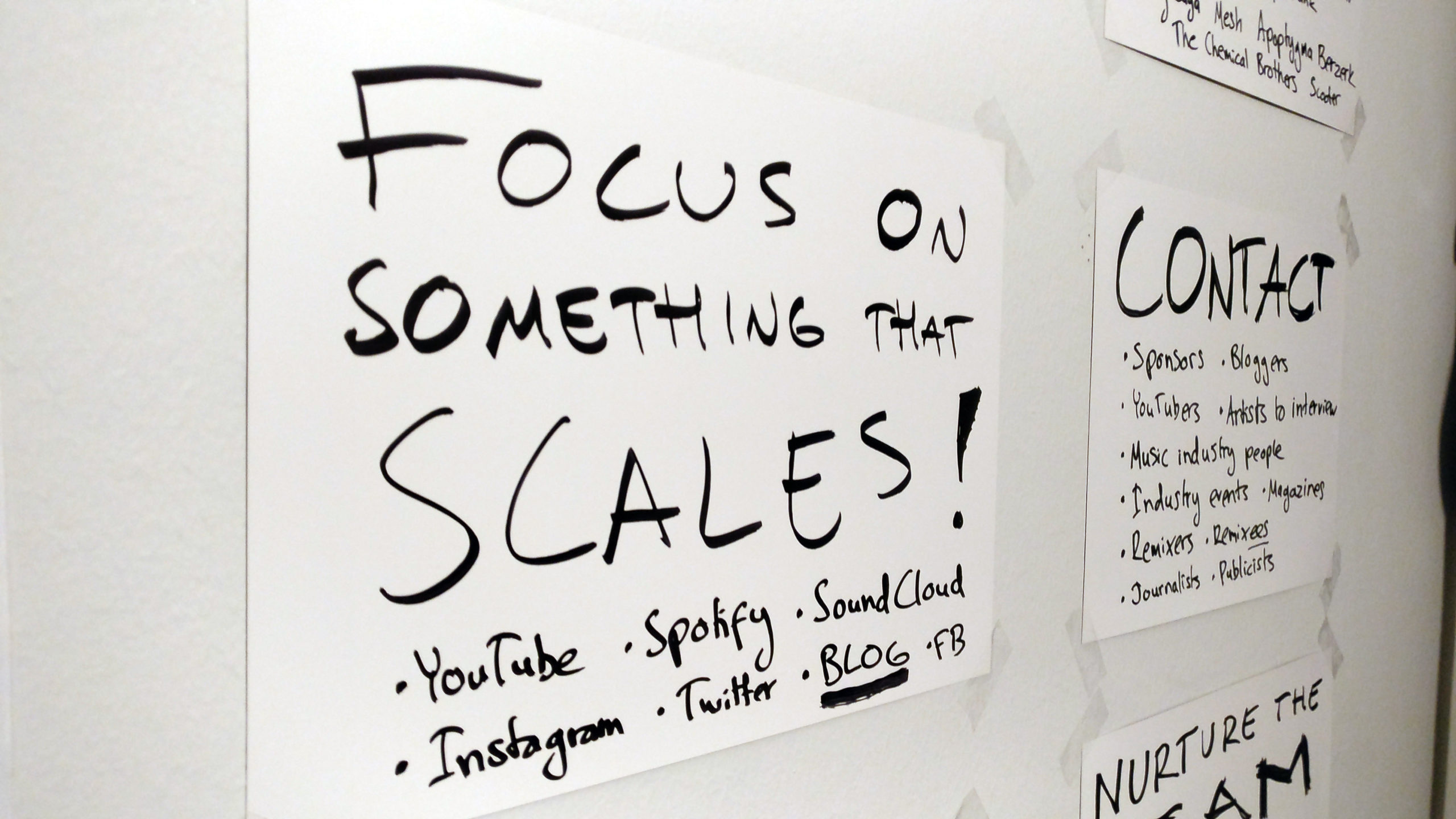 Ville, Mary and I have spent years fine-tuning our live show, and it has become a real spectacle. We’ve played to some decent audiences, and loved every moment. We’ve met some of our dearest fans at gigs, especially at the Seta beach party in Jyväskylä. Still, for some time now, I’ve come to the conclusion that doing live shows is not exactly what we should be investing our time in right now. Instead of booking more live shows, we should be making Unzyme known to a greater audience by shooting and marketing more music videos. And then do the shows.

There are countless ways of promoting a band, but the right way is the one that can be scaled. Especially music videos are important in making a name. In May 2016, we released our first music video (after releasing two albums without any music videos). The first video, The Completionist, received some moderate media attention. Nothing to get crazy about, but it was more successful than our previous attempts. Then, later in 2016, we released the second music video – Until the guilt is forgiven, which received a bit more attention. Two music videos were enough to tell me that I had neglected one of the most powerful tools of music marketing. The statistics told me to continue making videos. Lots of videos.

Of course videos are no replacement for live shows, but if we had spent as much time on making videos, as we spent on building the live show spectacle, a lot more people would be aware of our music. But then again, fiddling around with technology is something we enjoy, so all that time wasn’t exactly wasted. It was something we did very instinctively, and still continue to improve on. And the new guy Daniel has been dragged into the madness, too. Anyway, I’m quite proud of the live show.

YouTube offers very detailed statistics of the videos. Some of the stats are even better than what Google Analytics offers. These statistics show the countries and cities where people listen to our music in, and which songs they like. Also, videos can be advertised over time, and campaigns can be fine-tuned to serve for a very long time. Live shows can be advertised only once, and the process needs to be started all over again for every new event.

In January 2017, we’re releasing the third video from our upcoming album. If we can maintain this music video production cycle, eventually we’ll have enough people who are interested in having us playing in various venues and events. Even now we’re getting more live requests than before. It might be a result of having released some cool music videos. I love performing, and I’d really like to perform more often, but currently it’s more beneficial to shoot more music videos. A video reaches more people at once, and it helps to convince the right collaborators.

First make a name for yourself, then tour like hell

The death of my brother in 2013 made me realize that there is no time to waste, and soon after his death I started prioritizing things differently. I needed to start working on building the team, the skills and the tools that we needed to succeed. This also meant assuming the role of a leader, even more so than before. I had to make strict choices about the direction where Unzyme was headed. I had always been the leader, but in 2014 I became a more decisive leader. I became tired of waiting. I started obsessing over progress, and things started happening.

Yesterday I attended Budi Voogt’s music marketing webinar. It served as a reminder that things should be done in the right order. First, make yourself known, and tour only when you already have the audience.

Half a million total views on YouTube today. #onwa

One of the most important things in running a band

It started as an innocent experiment. Just a few g

Thanks to @sebastiantrzaska and his numerous late

As the old #Borderlands #adage goes: "There's no k

Crazy talk music video is in the gentle, yet super

You can play the role of a human in many ways. Per

The network of conscience, bound by conceptual li